By Mary Hopkin - Reprinted with permission from the Tri-City Herald 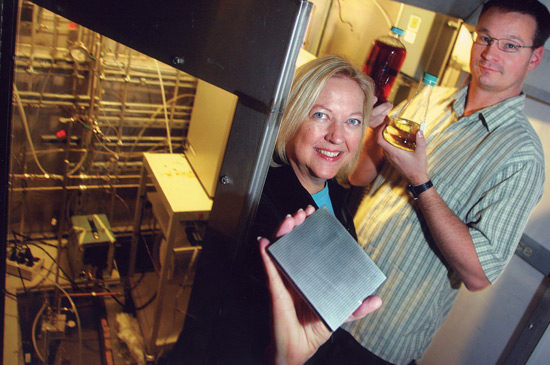 The privately held company will get $500,000 from Chevron Technology Ventures LLC, a subsidiary of Chevron Corp., to see if it can come up with a low-cost way to turn fuel into hydrogen using the company's proprietary fuel processing technology for commercial hydrogen production and purification.

"We've already proven the feasibility of the process," said Patricia Irving, InnovaTek founder and chief executive officer. "They are funding us to determine if it's commercially viable."

The company's "InnovaGen" micro-channel reactor -- a square piece of steel the size of a slice of bread that weighs less than a pound -- has amazing powers. It can turn diesel, vegetable oil, glycerol, gasoline, propane and virtually any liquid fuel into hydrogen that can be used to power fuel cells.

Although there are only a handful of vehicles on the road right now running on fuel cells, it is an emerging technology with distinct benefits.

Fuel cell vehicles powered with pure hydrogen emit no pollution or greenhouse gases -- only water and heat. The cars also are more energy efficient than those with traditional internal combustion engines -- and they're quieter.

Several transit systems in California are using some fuel cell buses, as well as some companies, like DaimlerChrysler, which have demonstration vehicle programs.

In addition, Ford, Honda, Hyundai and Toyota have fuel cell prototypes they are testing, and Mercedes-Benz recently rolled out its 2007 F-Cell -- a subcompact car that uses fuel cells powered by hydrogen.

But the cars aren't without challenges. The buses used in transit programs are on fixed routes and have frequent access to hydrogen. But car designers still are trying to figure out how to store enough hydrogen onboard the vehicle to allow it to travel as far as a conventional car would on a full tank of gas.

Case in point -- the Mercedes F-Cell: While it gets 57 miles per gallon, it can only hold enough fuel to drive 110 miles per day, which wouldn't get a Tri-City driver to Seattle.

And it might be difficult to find a place in Ellensburg where you can fill up with hydrogen.

That's where Innovatek's technology comes in. Irving said the company will determine if they can make the units inexpensively, making it possible for any gas station to have hydrogen available.

Although the InnovaGen can turn virtually any liquid fuel into hydrogen, using gasoline as a fuel wouldn't make much sense. It wouldn't be cost effective and still would be using fossil fuels.

"Because of the concern about global climate change and the drive to diversify fuel sources, there has been accelerated interest in the use of hydrogen as an alternative renewable fuel," Irving said. "The process we develop under this joint agreement with Chevron will use multiple feedstock fuels, including renewable oils such as biodiesel, to cost effectively produce hydrogen for vehicles."

Biodiesel can be used directly in combustion engines. But for cleaner, more efficient electrical power production, biodiesel can be reformed to produce hydrogen for a fuel cell, she said.

Ultimately, the company would like to have InnovaGen technology built into the cars -- allowing motorists to fill up with biodiesel that is transformed on board into hydrogen, also allowing the cars to have greater range.

"The smaller system size, reduced catalyst volume, and more-efficient process that is realized with InnovaTek's technology represents another significant step in moving the hydrogen economy from science to commercial reality," said Dr. Jeffrey Harrison, an InnovaTek board member.

In September, the Navy awarded a $1.8 million contract to InnovaTek to develop a portable power source that could be used by Marines in the field. Missions in remote locations frequently are limited by what soldiers can carry on foot, Irving said.

So the company is developing a personal portable fuel cell-powered generator to allow for long-term unmanned power generation and to recharge batteries.

"The fuel cell generators developed under this program will be used by the Navy's Marine Corps Expeditionary Units," said Jeff Pickles, Innovatek's chief engineer. "The MEU brings all the supplies it needs to sustain itself for quick mission accomplishment or to pave the way for any follow-up forces."

Engineers at the Army's research lab already are conducting demonstrations and tests of Innovatek's prototype system.